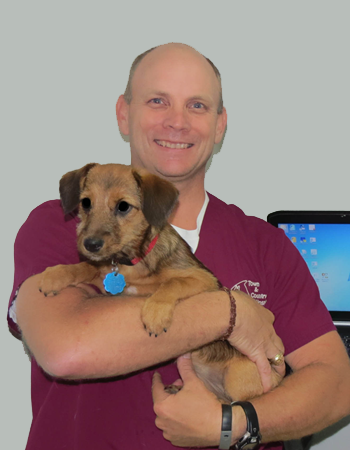 Cuatro was born and raised in the heart of the Texas Hill Country on a ranch between Hunt and Leakey.  He graduated from Leakey High School in 1985, and earned his undergraduate degree in 1990, when he graduated Cum Laude.  In 1994 he again graduated from Texas A&M University , this time with his degree in Veterinary Medicine.  He moved to Kerrville and joined Town and Country Animal Hospital as an Associate Veterinarian.  Cuatro became a partner of the practice in 1996 and purchased it in 2001.  He continues to take great pride in making our hospital better every year.  He currently lives in Kerrville with his wife, two sons, one dog and three cats.  He is certified in Vetstem Regeneration Cell therapy.  In his spare time he loves fishing and boating, as well as coaching his sons’ sporting events.  He is on the Board of Directors for Guadalupe National Bank as well as the Board of Directors of Texas Veterinary Medical Association.  He was awarded the very prestigious honor of General Practioner of the Year for the State of Texas in 2013.  He is a member of the 12th Man Association and Kerr County Texas A& M Club. He is also on the Chronic Wasting Disease panel with Texas Parks & Wildlife.

We are available for emergencies 24/7.
If you think your pet is having a medical
emergency outside of our regular office
hours, please call our after-hours line
at 830-367-5316.